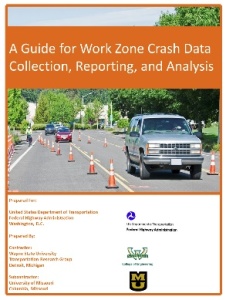 A webinar was held December 5th on work zone crash data collection and analysis. It was organized by Wayne State University and included speakers from the University of Missouri and Michigan State University. A recording of the webinar will be made available soon.

Several very good resources were made available as the webinar began including “A Guide for Work Zone Crash Data Collection, Reporting, and Analysis” which was produced for the FHWA by the Wayne State University College of Engineering. This guide can be found at:  https://www.workzonesafety.org/files/documents/training/fhwa_wz_grant/wsu_wz_data_collection_guide.pdf

As a work zone ITS practitioner, I have deployed many systems over the years but have very little data to prove the effectiveness of those deployments. The problem has always been establishing a base line of the probable number of crashes given the traffic control, project duration, traffic volumes, etc. Only with that base line can we compare our actual crash numbers to determine whether the system was cost-effective.

The crash data guide states the problem very succinctly, “In order to perform an effective work zone safety analysis, the appropriate work zone crash data needs to be available. The availability of this data is only as good as what is collected on the state crash report form.”

The webinar pointed to several states’ best practices in this regard. At a minimum, states are required to include a checkbox on their form to indicate if the crash was work zone related. But states including Connecticut, Iowa, Minnesota, Pennsylvania and Virginia collect much more. They go into detail about the location of the crash within the work zone, and what types of traffic control and construction activity was in place at the time of that crash.

Once CFMs are developed, the rest of the process is fairly simple. Compare the CFM associated with your proposed system to the traffic volumes where that system will be used, and you will know immediately whether the use of that system is justified. The use of these systems is already taking off, but there is still some guess work involved in the decision to use or not use work zone ITS. By developing CFMs we could speed that process along and make it more scientific.