Late last year the FHWA Every Day Counts initiative held another wonderful webinar. This one covered two more work zone ITS products: variable speed limit systems and dynamic lane merge systems. This webinar was so chock full of information that I will discuss them one at a time. You can view the recorded webinar at: https://connectdot.connectsolutions.com/p1rhnco4915/?launcher=false&fcsContent=true&pbMode=normal .

Josh Van Jura of Utah DOT described VSL experience in his state. Utah began with static (manually adjusted) signs. He says they have many interstates posted at 80 MPH. And for construction, especially where workers are exposed to traffic, they like to reduce those speeds significantly – sometimes as much as 30 MPH or more. He later said these systems are especially useful for slab replacement work where you have a relatively long work zone, but workers are present and visible only in one or two small locations. So the system gets the speeds down in advance of the work. It also drives down the speed variance. 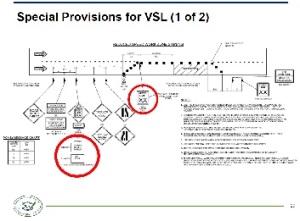 So far they have chosen to use these systems where queuing is unlikely. They don’t want to solve one problem, only to cause another upstream. They have been pleased with the results and now want to move to dynamic VSL systems. They applied for and won a grant to finance their research. Kimley-Horn is doing the work.

Mr. Van Jura made an interesting point. He said that this project was especially susceptible to scope creep. As they discussed their wants and needs folks asked for CCTV, weather detection and more. Much of that was for the testing phase primarily. But even then those features would have driven the cost up significantly, so they chose to do without them.

The basic system uses sensors to measure speeds in and near the work zone. Those speeds are sent over a cellular link to a server where they are processed by an algorithm that then adjusts the posted speed limit to match the measured 85th percentile. The displayed speed limit is adjusted no more than every 10 minutes. Everything is date and time stamped showing the posted speed limit at that time at that location.

Todd Foster of VerMac asked what type of sensors they plan to use. As he said, doplar has occlusion issues but side-fire radar is a pain to set up. Josh said they plan to make that decision on a project by project basis. For two lane roads, they will use doplar. For projects on larger facilities they will weigh the need to relocate the sensors, the space available to place those sensors, and the costs associated with each to decide what should be required for that application.

A survey during the webinar asked the audience if their agency was considering using VSL systems in their work zones. 70% said yes. It then asked whether they were considering a regulatory system or an advisory system. 73.8% plan to use a regulatory system. Utah Highway Patrol cooperated fully with this UDOT initiative. Apparently other states don’t see that as an issue either.

We look forward to the final publication of Utah’s research. But it sounds like portable VSL’s should be another tool in our work zone ITS toolbox.

In our next post we will look at their discussion of lane merge systems.